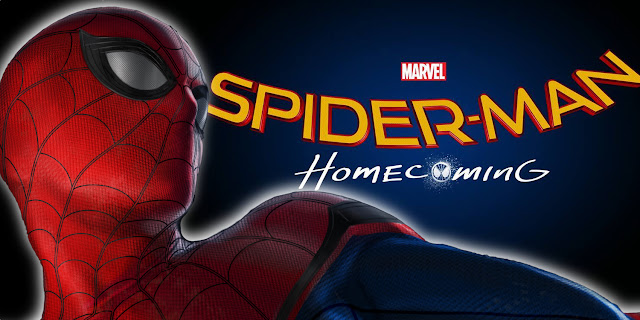 I'm so over Spider-Man. After 3 movies that were ok and a way too soon reboot with two more movies that were good but I mean - we didn't need a reboot. Too soon Sony, too soon. Now that that is off my chest I will say I'm not a huge Spider-Man fan, he wasn't a favorite of mine growing up and I have never really connected with the character but I will say - this was a great movie that is a breath of fresh air into a very tired franchise.

You don't really need a summary because I mean - you're gonna go watch it. Michael Keaton as vulture YES. So good. I mean, I loved him as Batman and Beetlejuice (who doesn't?!) and his acting was just amazing. Tom Holland was great As a teenage, awkward kid still trying to make it through high school and figure out his place with the Avengers. His main source of contact to Iron Man in the film was Happy, John Favreau, I'm sure you remember him from all the iron man movies; the banter between the two of them and the jokes kept me laughing. But who really stole the show was Spider-Mans friend, Ned played by Jacob Batalon, he was hilarious as the equally geeky best friend building lego Death Stars and becoming "the guy in the chair". Zendaya was a fresh take on Mary Jane, quirky and witty, an artist who wasn't afraid to speak her mind or show she has intellect. I really like how they addressed many social issues racially and politically, through her one liners and other characters in the movie.

All in all this was a good movie, marvel movies all kind of follow the same formula. I love when they make a movie that's fresh and new and I felt like this was it. Surprisingly too because this is the second reboot for Spider-Man. Oh and don't forget to stay for THE BEST post credit scene ever!

Spider-Man Homecoming welcomes the superhero back to the big screen as he tackles trying to balance between proving his skills to his mentor Tony Stark and being a seemingly average high schooler. Soon he gets distracted and brings attention to himself by trying to stop crimes on his own and is targeted by a villain that is willing to do anything to stop him.

The movie follows Spider-Man directly after the battle he helped the Avengers with toward the end of Captain America: Civil War. Although if you have not seen that movie you will still be able to follow along, I definitely recommend watching so you can have a better understanding of why proving himself to Tony Stark is so important.

This is a remake of Spider-Man that actually did the character justice because it brings back his innocence and good hearted spirit despite having super powers. Instead of the movie focusing on the ooo's and ahh's of what Spider-Man can do and the guilt trip of his uncle's death, it keys into where he is as the "friendly, neighborhood Spider-Man" as a 15 year-old boy.

I liked how even though the plot followed the key aspects of Peter Parker and his quirkiness, it veered off to make him fit into a 2017 teenage lifestyle. His gadgets and suit were up to date (thanks to Tony Stark of course) and even though Peter was so stuck on proving himself, he also wanted to catch the attention of a senior girl named Liz. Yes you read that right and without risking giving away any spoilers, I liked the differing direction they took Mary Jane or MJ in this version.

Also with Michael Keaton as the villain, I knew that he would deliver his character well and he did. With a growing greed that continuously grows throughout the movie he portrays his character as a menacing yet calculated mob-boss. Uncommon to previous villains he does not attack unless he feels that he is not getting what he deserves from the life as a working family man and has a soft spot for his loved ones which plays out in a really interesting way.

I will say that I did not like some of the fight scenes because the majority of them took place in really dark spaces. That being said it was difficult to see some of them since the battles moved so quickly so it became a loud, dark fight which was slightly uncomfortable to watch because of the eye strain. I would not recommend watching this superhero movie in 3D for that reason.

Spider-Man: Homecoming is truly a welcome home to the hero and his place in the Marvel franchise. It is charming and comical and brings back who Spider-Man is and leaves room for more to come. Make sure to stay post credits for a Marvel-esque ending!