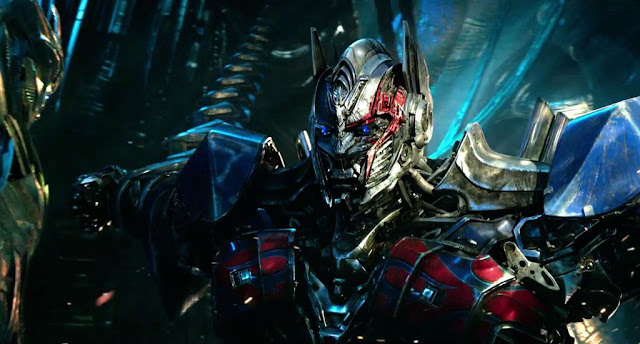 With Optimus Prime gone, the war between humans and the Transformers has gone to hell. The battle has had the line blurred, as to whether Autobots are here to help the humans, or if they are toxic for the future of our planet. The fate of the rest of the world could be determined by secrets lied by Transformers, throughout the history of our world. Will these secrets save all of planet earth, or are the humans forced to accept the fate of the Decepticons transforming earth into a new cybertron.

It’s been almost ten years since the first Transformers film was released, back on July 3rd of 2007. Now in 2017 we have the fifth film in this dreadful series coming to theaters. I believe that Transformers: The Last Knight had a chance at being a watchable film. It seemed like it was going to be more story driven with all of the Transformers artifacts being left in history and really digging deep into the lore of the Transformers. And I have to admit when I first started watching this film I was very excited and optimistic. It opened very strong and had me very intrigued as to what was going to develop out of this story. But what I realized about fifteen minutes after the film started was that nothing changed. It's just as senseless as any of the other Transformers films. Mark Wahlberg (playing Cade Yeager) just could not connect with the audience emotionally, and just stuck to portraying a very basic “bad-a**” action hero. I do not even want to mention how pointless Vivian Wembley (played by Laura Haddock) was. She did not add anything to the plot line. She was pretty much just on screen for eye candy. Also there were so many characters introduced for no reason, just to be left out for the rest of the feature. And Anthony Hopkins (playing Sir Edmund Burton) was only used to narrate what was taking place the whole time, so that the audience isn't lost in this overly convoluted plot.

Speaking of the plot, there is way too much going on. New plot points were being brought up, but never really developed upon. This left audiences very confused. One of the biggest problems is that I could never get into it. And the film just kept going on, and on, and on. It was a dread to get through the two hour and twenty eight minute runtime. There was never a point when I actually cared what was happening on screen. With all this complexity to this film there are also numerous meaningless fights between the Transformers, if you can even call them fights. They are pretty much just destroying random stuff, only because it is visually appealing. But it has lost its wow factor. Every action movie now has top notch CGI battles. But there was nothing that made Transformers: The Last Knight unique. The script was also very dreadful, with non-stop middle school jokes coming in left and right. I can not stress enough how bad these ridiculous jokes are. The direction was all over the place and like I mentioned earlier there was very little character development and poor acting. It was a complete waste of time for Mark Wahlberg and Anthony Hopkins. The editing was also really weird and choppy. It tried to be epic but really was not working… just like the rest of the film.

I am going to try my best to bring some positivity out of this formulaic sci-fi action block-buster. One thing I can admit is that Michael Bay did spend a little more time on the human characters, which helped the film. Also the plot point of Transformers secretly being all through the history of the earth was very interesting, but just did not play off. Another positive attribute of this film is that just like the rest of the series, it looked beautiful and the CGI was great. And while all these are great they still are not enough to make this film redeemable.

Over-all Transformers: The Last Knight is a major waste of time and money. Is just constant mayhem and an attempt at a interesting plot but in the end fails. Transformers could have been a positive shift in direction for this senseless series, but it did not hit that mark. I can not recommend this film to anyone, unless you are the target audience who likes turning your brain off and just trying to have fun watching explosions and robots fighting.

Wow talk about a summer blockbuster!

Transformers: The Last Knight is on the same level as all the other Transformers, and that is exactly what we need for the lead into the summer! If you are the type who needs a movie that has more dialogue, don't understand what a summer time movie is suppose to be, or maybe you just like to watch films that have more back story, then this movie is not for you.

If you go into the movie not watching the previous ones, the movie itself does a good job to not bring up too many references from the last four. However, if you did see the last couple, you will enjoy the small nods that they do bring to light in the movie.

The only down fall I found with this movie was the length. It was a rather long film, but thank goodness for popcorn. I have the largest bucket I could get and anytime there was no action on screen, no excitement, I would just reach in my bucket and fill my mouth with as much popcorn as I could, until the next battle scene, then I was into the movie again.

Anthony Hopkins was the surprising star in this movie. Now this doesn't mean Mark Wahlberg had any fault, he can do no wrong. Hopkins was just the un-song hero of the movie, he brought comic relief and he had an attitude that you will make you want to see more of him in the movie.

This is the start of the popcorn summer. It will get you excited to see what the rest of the summer has in store for you. You won't want to miss this lead in.