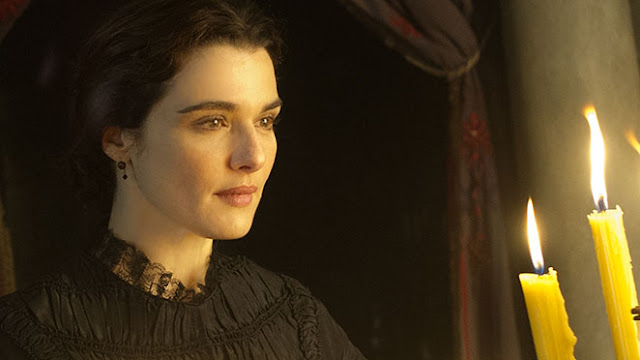 Based on the novel of the same title by Daphne du Maurier, My Cousin Rachel follows the young, orphaned Englishman Philip Ashley who is taken in by his elderly cousin Ambrose. Due to his uncle being content on being a stand-up father, the estate never sees any women. That idea is soon shattered when his cousin grows ill and moves to Florence where he falls in love and marries then suddenly dies. Philip grows suspicious of the cause of Ambrose’s death when he receives a letter hinting him toward Rachel leading to his demise. Stricken by grief and the need for revenge, Philip prepares to meet the widowed Rachel with hatred however her mysterious charm and beauty leads to a more complicated path of is revenge truly worth it.

This film has an eerie feeling that underlies from the start to the finish as the music plays a large role in setting the tone. There is so much anticipation built around the meeting of Rachel that when she finally shows up about 20 minutes in, you will already have your assumptions of who she is based on speculation and hearsay from the characters, especially the letter from Ambrose telling of how he is tormented by Rachel.

The build up leads to strong sense of wonder throughout the film because I was constantly trying to figure out exactly who was Rachel and what were her plans. Played by Rachel Weisz, Rachel becomes a mysterious yet seductive woman that takes the Ashley estate by storm through her charm and manipulation. In fact, the manipulation and almost spellbind that Rachel puts Philip under will have you skeptical just like the people that had seen him grow up felt watching him fall for her.

What really made this movie interesting is how large of a character Rachel becomes because of her sly nature. Overpowering (in a good way) the other members of the cast, Rachel Weisz really took her character to another dimension because every time you thought you had her figured out she became almost like a double actress in the way that she would manipulate those around her to be who she needed to be in that moment. She did really well in transforming all of the rumors into a way that suited her because she left most of them, if not all unanswered leaving both the characters and the audience wondering who she really was.

The connection between the characters also plays in the underlying eerie feeling because it is as if everyone knows what is going on but Philip because of his oblivion from falling in love with Rachel. There were numerous times where audience members, including myself, would laugh and sometimes cringe at the naïveté of Philip with Rachel because of his infatuation with her. Also Philip’s main estate helper provided much needed comedic relief to the film among the puzzling plot.

Bringing a 1800s movie to a modern day audience is never an easy feat but I feel like this movie was well made. With a strange twist at the end, this film left me with a chilling feeling that I thought was the perfect ending for such an odd story. The entanglement of innocence and guilt, good and evil, and the idea that love can be blinding truly tells a story that is sure to leave you thinking you know but most likely you have no idea.