Enter to win an passes for MINDGAMERS.
Mind on Movies is very excited to announce that we are working with Fathom Events to giveaway passes to the new film MINDGAMERS at select locations on March 28th, 2017. Select Cities Below 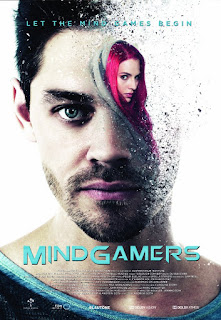 Cinema audiences will help make neuroscience history: for the first time, one thousand human minds will be simultaneously connected via cloud technology while they watch MindGamers. An image of that mass mind-state will be broadcast to cinemas across the nation as audiences in two locations participate by wearing a cognition headband.

Headlined by Sam Neill (Jurassic Park) and Tom Payne (The Walking Dead), the film follows a group of brilliant young students who create a wireless neural network with the potential to link every mind on Earth via a quantum computer. But they soon discover that that their innovation is part of a more sinister experiment.

This once-in-a-lifetime event will open with introductory talks from leaders in the fields of technology, neuroscience and the collective consciousness. Following the immersive feature film, MindGamers, the event will conclude with a LIVE Q&A and reveal the world’s first image of collective human cognition… created simultaneously by the audience.

Like our Facebook Page, Subscribe, and Comment below the location you want to win!
Disclaimer: NO PURCHASE NECESSARY. ONE ENTRY PER PERSON. Must be 13 years of age or older to win passes. Employees of all promotional partners and their agencies are not eligible. Void where prohibited. Winners will be contacted via e-mail to receive their e-pass. Sponsors not responsible for incomplete, lost, late or misdirected entries or for failure to receive entries due to transmission or technical failures of any kind.