This shopper is on the search for more than just clothes. 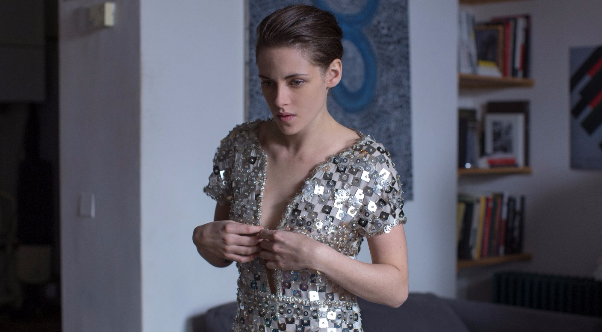 Personal Shopper is a psychological film starring Kristen Stewart as American Mareen living in Paris, France and working as a, you guessed it, personal shopper for a jet-setting celebrity. When she’s not travelling the streets to head into very expensive stores to retrieve very expensive clothing, she’s spending her time as a medium trying to contact her deceased twin brother. When she begins receiving strange text messages from an unknown number, she wonders if this may finally be her brother reaching out.

Directed by French Olivier Assayas, this film was hard to put into any specific genre. Although it starts off somewhat as a ghost story, I wouldn’t really classify it as scary at all. Instead it was more of a “finding yourself” kind of story as Mareen not only works on truly accepting her brother’s death, but also begins to enjoy some freedom and defiance against her conceited boss. Overall, I found the movie to feel a little all over the place. There were times where it felt like a haunting thriller, then a tedious adventure through designer stores, before becoming a crime mystery, and then a psychodrama about finding your inner peace. Although that kind of contemplative film may work for some people, I found it to be a little daunting, and on some occasions a little boring.

At times, I did feel like this was the perfect movie for Kristen Stewart. The short hair, the weary attitude, the “my heart hurts but I won’t let it show face.” I sat through the movie thinking, yeah Kristen is definitely Mareen. But then there were parts where she was supposed to be afraid, or sad, or curious, and on Kristen Stewart, all those faces pretty much looked the same. And because I couldn’t feel those emotions from her, it left me feeling a bit unsettled.

Overall, if you enjoy watching a movie that makes you have to think a little harder, this film could be for you. I did enjoy the fashion aspects of the film and the score, but besides that, the film could have cleaned up its storyline a bit more.

That horrible headache-causing ending. In my personal opinion, the ending is the most important part of a film because that is the last thing the audience remembers. And that ending was horrible. It was so confusing, many people left the theater believing the murder didn’t even exist. In my opinion, I don’t even see the point of the murder being in this kind of film. If the director wanted Maureen to get her freedom, there were many ways he could’ve written it for her. The murder mystery felt like the tipping point for this jumble mess. I also did not see the point of the “sensual” scenes. They felt so out of place, it was almost like the director was like “Hey Kristen, take off your shirt. That’ll sell tickets. Okay great.” I just didn’t feel like it flowed well with the ambience of the movie.

Oh and may I just point out one thing that really bothered me. It is the 21 st century. If there’s an unknown person harassing you on iMessage, you block their number. You don’t tell them your deepest darkest secret, send them pictures and meet them in hotel rooms after they’ve stalked your apartment. I understand this character may have felt lonely, but they’ve got book clubs for that. Clearly someone never watched Dateline or Taken as a child.
_________________________________________
Posted: March 24, 2017
Labels: ArielAguilar17, Reviews17
Newer Post Older Post
Subscribe to: Post Comments (Atom)
Subscribe to Mind on Movies for Movie Screenings and Giveaways.