Enter to win SING on Bluray!
Mind on Movies is very excited to announce that we are working with Universal on the upcoming Blu-ray release, SING, starring Matthew McConaughey and Reese Witherspoon. 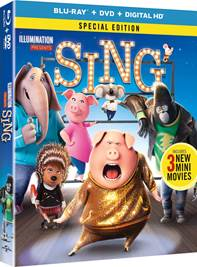 Movie Info:
Set in a world like ours but entirely inhabited by animals, Sing stars Buster Moon (Academy Award® winner Matthew McConaughey), a dapper koala who presides over a once-grand theater that has fallen on hard times. Buster is an eternal—some might even say delusional—optimist who loves his theater above all and will do anything to preserve it. Now faced with the crumbling of his life’s ambition, he has one final chance to restore his fading jewel to its former glory by producing the world’s greatest singing competition. For the funny, charming, uplifting—and most of all, deeply human—film that features more than 65 songs, McConaughey is joined by fellow Oscar® winner Reese Witherspoon, as well as Seth MacFarlane, Scarlett Johansson, John C. Reilly, Taron Egerton and Tori Kelly. From writer/director Garth Jennings, Sing is produced by Illumination Entertainment founder and CEO Chris Meledandri and his longtime collaborator Janet Healy.


a Rafflecopter giveaway
Disclaimer: Only one entry per mailing address per giveaway. The prize will be sent via FedEx or UPS. No P.O. Boxes please. This contest is from Mind on Movies working with Universal. The entries will be checked. You must do what it says on the widget option to enter to win.
Posted: March 06, 2017
Labels: Expired Contests
Newer Post Older Post
Subscribe to: Post Comments (Atom)
Subscribe to Mind on Movies for Movie Screenings and Giveaways.