Enter to win FENCES on Bluray!
Mind on Movies is very excited to announce that we are working with Paramount on the upcoming Blu-ray release, FENCES, starring Denzel Washington and Viola Davis. 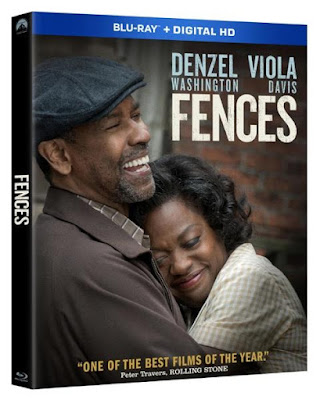 Adapted by legendary writer August Wilson from his own renowned play, FENCES follows former League baseball player Troy Maxson (Washington) in 1950s Pittsburgh as he fights to provide for those he loves in a world that threatens to push him down. An unforgettable and timeless masterpiece, FENCES “connects with people on a deep, emotional level” (Glenn Whipp, Los Angeles Times) and pulses with the universal truths of love and forgiveness, despite what lies beyond your own fence.

The FENCES Blu-ray Combo Pack includes over 30 minutes of fascinating bonus content. With interviews from the cast and crew, including actor/director Denzel Washington and Viola Davis, discover how August Wilson's Pulitzer Prize-winning play was adapted from stage to screen. Plus, visit the movie’s Pittsburgh set, learn how Davis prepared for her award-winning performance, and much more.


a Rafflecopter giveaway
Disclaimer: Only one entry per mailing address per giveaway. The prize will be sent via FedEx or UPS. No P.O. Boxes please. This is a sponsored post on behalf of Review Wire Media for Paramount Pictures. I received information to facilitate my review as well as a promotional item to thank me for my participation. The entries will be checked. You must do what it says on the widget option to enter to win.
Posted: March 08, 2017
Labels: Expired Contests
Newer Post Older Post
Subscribe to: Post Comments (Atom)
Subscribe to Mind on Movies for Movie Screenings and Giveaways.