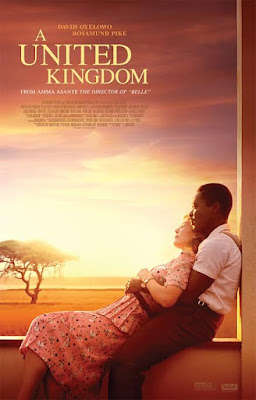 Movie Info:
A UNITED KINGDOM is the true story of the forbidden love of King Seretse Khama of Botswana (David Oyelowo) and Ruth Williams (Rosamund Pike), a white woman from London, which caused an international uproar when they decided to marry in the late 1940s just as apartheid was being introduced into South Africa. It was a decision that altered the course of African history.

A UNITED KINGDOM opens in Theaters on March 3rd, 2017.


Disclaimer: NO PURCHASE NECESSARY. Passes available on a first-claim first-serve basis. You will need to register for a free FoxSearchLightScreenings.com account in order to redeem the passes and each registered user account is limited to claim one admit-two pass. SEATING IS LIMITED, SO ARRIVE EARLY. PASS DOES NOT GUARANTEE A SEAT AT THE SCREENING. Refer to screening pass for further restrictions.