How much battle is behind that Wall. 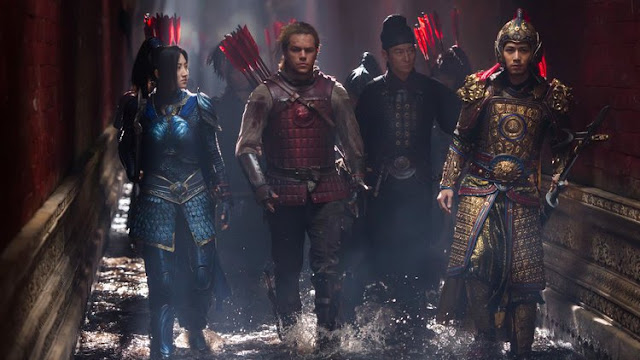 The film the Great Wall explores two mercenaries that discover the elite army that protects the Great Wall of China from monstrous creatures. Forced to keep the secrets of the wall protected, the duo find themselves involved in the fight to save humanity.

While this movie had great fight scenes and really intriguing designs and techniques for battle preparations, I wasn't "wowed". Without going into specifics, I honestly expected more from the plot but instead I was left feeling like I wanted more. They didn't delve into certain things like I wanted and focused a bit too much on the suspense factor.

With that said, the suspense in this movie is intense and worth the watch. It kept me interested with the varying angles and camera shots during the battle scenes and I even jumped a time or two (watch it in 3D if you can!). Also the humor through the quips and sarcasm kept me entertained and also kept the movie from getting too serious and on the verge of a light horror film.

All in all, I would say this film is not a must see but at the same time if you have some time it's worth watching Matt Damon kick butt.

I was hoping the monsters would have had a better reasoning behind why they attacked the dynasty other than the weak story of a greedy emperor plus a convenient supernatural meteor crashing into a mountain releasing them but nope. I feel like there could have been so much more behind it and why even though the monsters were hideous they had intricate designs on their heads or why the eyes were on their shoulders. The lackluster backstory of the monsters made it hard to get into the movie and I wish they would have included more effort and explanation on them.
_________________________________________
Posted: February 17, 2017
Labels: AshleyBell17, Reviews17
Newer Post Older Post
Subscribe to: Post Comments (Atom)
Subscribe to Mind on Movies for Movie Screenings and Giveaways.