Can Mark bring it home with Patriots Day? 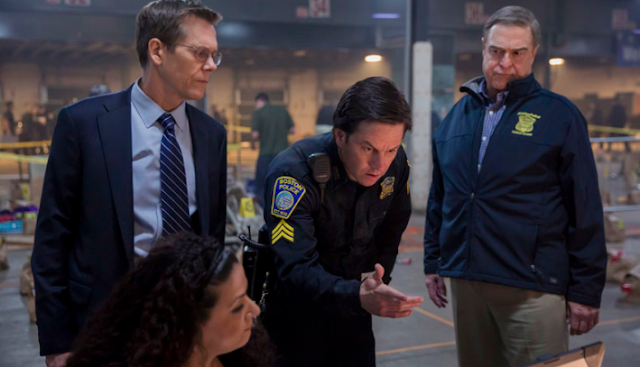 Patriots Day is the one of the many nicknames that refers to the Boston Marathon. It is also the title of the film that focuses on the tragic bombings and subsequent events that occurred at the Marathon in April of 2013.

I must say that this film did a great job at really piecing together everything that happened within the four day timespan. The intensity of the angles, types of cameras used (like cell phones) and music made it feel like the audience was there firsthand which was eerie but necessary I think for this movie. There are also a lot of extremely gory scenes which I thought was also necessary to show because it brought back the memories of seeing it on all over the news and how horrific it truly was.

The movie did a great job at keeping a suspenseful feel. Even though I was familiar with the story, the way they included silence during various scenes throughout the movie left me hearing my heart pounding as almost seemingly part of the soundtrack.

I did like that the film delved into the true stories from actual people involved in the tragedy which made the movie even more lifelike. Hearing and seeing the stories play out brought tears to my eyes to see how the extreme behavior of two individuals could bring such sadness and heartache. Also the way they connected the real stories was very interesting and kept me on the edge of my seat.

I think Patriots Day was a great tribute to those involved in the 2013 Boston Marathon. I definitely recommend it as a must see.

I wouldn't have changed a thing. I really liked that it included the real people that the actors portrayed and how the Marathon changed their lives that year. It really brought home how through the tragedy Boston held strong and will continue to be strong.
_________________________________________
Posted: January 13, 2017
Labels: AshleyBell17, Reviews17
Newer Post Older Post
Subscribe to: Post Comments (Atom)
Subscribe to Mind on Movies for Movie Screenings and Giveaways.