Review: Attack of the Lederhosen Zombies

Are these zombies enough to give the genre new life? 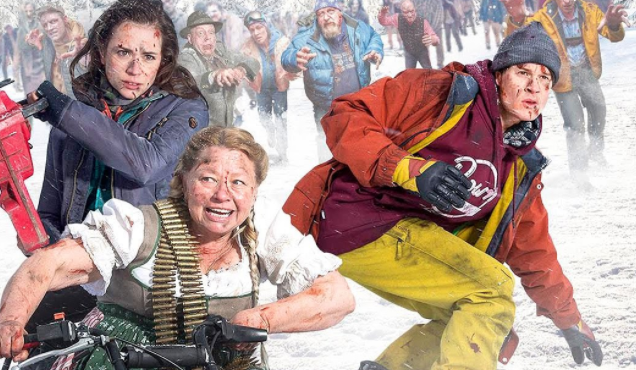 Between all 83 editions of the Resident Evil movies, the 28 Millennia Later saga, World War A-Z, and… even Warm Bodies and Pride and Prejudice and Zombies just to name a few, there has certainly been no shortage of zombie flicks of late. This zombie train certainly seems to have no brakes, so is the recent addition of Attack of the Lederhosen Zombies enough to be a breakout cult classic?

In an oddly bro-fest filled version of the Walking Dead, the film starts off with two friends just signed to a professional snowboarding contract. But when the main character, our favorite stereotypical douchebag, tries to impress a surprise guest by snowboarding off a mountain nude, his professional career comes to an embarrassing end. With his contract all but lost, he and his best friend end up abandoned on the mountain with his girlfriend. Meanwhile, the zombie apocalypse is looming as the ski resort owner is trying to sell his new machine that can create snow… with the slight problem that some of the chemicals inside it have a side-effect of infecting people and turning them into zombies. With the main characters trapped on the mountain as the outbreak spreads, we get the typical shenanigans you would come to expect from our favorite zombie classics.

Spoiler alert: you do not get to see any zombies in actual lederhosen.

The missing lederhosen-clad zombies is sadly only the beginning of my problems with the film. It is unclear what audience this film was actually trying to cater to, because I cannot imagine actual zombie fiends, sci-fi fans… or even snowboarders/ low budget sports film fans actually enjoying this movie. But whoever it was for, it missed the mark. The film is certainly supposed to be tongue-in- cheek and a slapstick comedy, but the overall production value was so low, it ended up feeling like they were trying too hard. The film was too ridiculous and the acting was too cheesy and low-brow to take seriously, even as a comedy. We have had some great parodies of their respective genres with Scary Movie and Zombieland, but this is not one of them. It also felt like the film was trying to become a cult-classic, but what makes cult-classics actually remarkable is that they were not originally trying to be cult classics. Even the snowboarding scenes (all 3 of them that last a total of like three minutes of screen time) were lackluster.

We all know those bottom of the bin films at Walmart that cost $1, or even those cheesy horror Netflix films that Netflix bought at bargain prices that they only put in their library to make it look like they have more films than they really do. This is one of those films. And just like all those other films, it’s better left untouched. Even for what it is supposed to be, a zombie comedy, which we have had plenty of in recent years, it just fails to meet the mark.

1 out of 5
What would I have changed? (Spoilers)
Click here to read what I would Change

I do have to give the film credit for one scene in particular. Toward the end, I was thoroughly entertained when the main character and his girlfriend have a zombie snowboarding murder montage. AND when the badass bartender singlehandedly took out a horde of zombies with a snowblower. THAT is what I came into the film hoping for. That gratuitous, over-the- top, far- fetched murder that should accompany any good zombie parody! If we had more of that, I think the film would’ve been worth watching. But sadly, it wasn’t worth slogging through the rest of the film for those few scenes.
Another small thing I didn’t understand was how one of the characters didn’t die by getting stabbed in the eyes. I mean, I get the filmmakers were not going for realism, but… I just don’t get it.
_________________________________________
Posted: January 23, 2017
Labels: JonathanJimenez17, Reviews17
Newer Post Older Post
Subscribe to: Post Comments (Atom)
Subscribe to Mind on Movies for Movie Screenings and Giveaways.