Enter to win an Admit-Two Pass to see Romeo Et Juliette Live!
Mind on Movies is very excited to announce that we are working with Fathom Events on Romeo Et Juliette, in selected theaters on Saturday, January 21st, 2017 (LIVE) 12:55pm ET to giveaway an admit two to select winners. 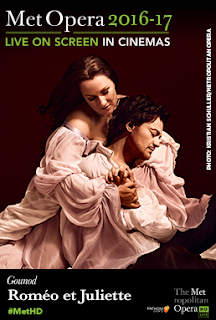 The electrifying team of Vittorio Grigolo and Diana Damrau reunites for a new production of Gounod’s opera based on the Shakespeare play. Damrau makes her role debut as Juliette in Bartlett Sher’s new production, conducted by Gianandrea Noseda. Elliot Madore sings Mercutio and Mikhail Petrenko sings Frère Laurent. Sher’s staging is a La Scala production, initially presented by the Salzburg Festival, where it premiered in 2008.


Enter below to win!
a Rafflecopter giveaway
Disclaimer: Only one entry per mailing address per giveaway. The prize will be sent via FedEx or UPS. No P.O. Boxes please. This contest is from Mind on Movies working with Fathom Events. The entries will be checked. You must do what it says on the widget option to enter to win.
Posted: January 08, 2017
Labels: Expired Contests
Newer Post Older Post
Subscribe to: Post Comments (Atom)
Subscribe to Mind on Movies for Movie Screenings and Giveaways.