Fences puts Denzel and Viola at their best! 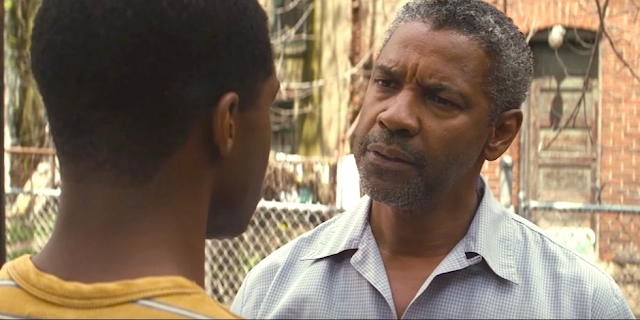 With a lot of plays, even great ones, the transition to film can be difficult. And it’s usually not because their narratives aren’t strong enough for the medium, but because the very nature of a play- from the script, staging, and acting methods applied to the overall viewing experience- is meant for the theater and the theater going audience. To translate it for the screen can sometimes mean taking away from the very qualities and artistic details that made it so great on stage to begin with, in an effort to appease the larger format and audience.

It’s a fine line to straddle for a director as well as the entire cast and crew. If you veer too much towards keeping a play a play on screen then you risk negating the entire purpose of turning it into a film to begin with (and might as well have just recorded the original play and sold it on DVD/VOD/streaming). But if you veer too far away from it you risk losing the essence of the original script and soul of the play, which could cost you both your original and new target audience. But when done right, a film adaptation can add new depths, clarity, and texture to a play’s original narrative; delving further into characters and details, all while retaining the original excitement and intimacy (a huge part of most stage productions and easiest part to lose in adaptation) of a play. Other times, they can try too hard (or not enough) and risk a film that is either too pedantic, melodramatic, or just simply inept. Remaining faithful to the narrative while taking advantage of the new medium is a balancing act.

“Fences”, in my opinion, gets it right! Based on August Wilson’s award-winning 1987 play, the film centers on the life and struggles of fast-talking, working class, African-American father, husband, and garbage collector Troy Maxson (Denzel Washington) and his family in 1950s Pittsburgh. The proud and overbearing patriarch of his family, Troy’s complex and compelling personality and relationships with his family are the driving force of the narrative. Washington’s obvious passion for the project shines through compellingly in both his roles as director and star, as it does for the rest of the small (almost entirely) pulled-from-the-Broadway-play cast. From Viola Davis’ fierce performance as stronger-than-you-realize matriarch Rose to Mykelti Williamson’s heart winning and award worthy portrayal of Troy’s mentally disabled brother Gabriel.

The film opens up the setting and parameters of the play while still managing to hold on to the intimacy and character connection by never minimizing but, in contrast, maximizing the focus and weight of each performance. As Davis said in a recent “60 Minutes” interview, “people say everything in film is small. Every moment is small. You gotta play it small. Sometimes moments are not small.” And no moment in this film is. From the dialogues to the monologues and all the places in between. Though some may see it as a bit too stagey in the beginning, the theater-like emphasis on the language and performances keeps you intently focused on every word and action. With an almost musical quality, the entire film has a soul and rhythm that never gives you a chance to tune out. “Fences” leaves no room for passive viewing.

A faithful and successfully compelling adaptation, the “Fences” film delivers August Wilson’s play for a new generation with the reverence and justice it commands!