Enter to win an Admit-Two Pass to see Nabucco!
Mind on Movies is very excited to announce that we are working with Fathom Events on Nabucco, in selected theaters on Saturday, January 7, 2017 (LIVE) 12:55pm ET to giveaway an admit two to select winners. 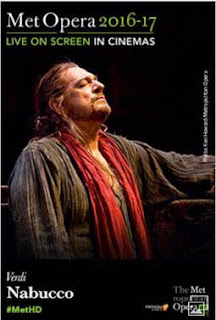 
Enter below to win!
a Rafflecopter giveaway
Disclaimer: Only one entry per mailing address per giveaway. The prize will be sent via FedEx or UPS. No P.O. Boxes please. This contest is from Mind on Movies working with Fathom Events. The entries will be checked. You must do what it says on the widget option to enter to win.
Posted: December 30, 2016
Labels: Expired Contests
Newer Post Older Post
Subscribe to: Post Comments (Atom)
Subscribe to Mind on Movies for Movie Screenings and Giveaways.