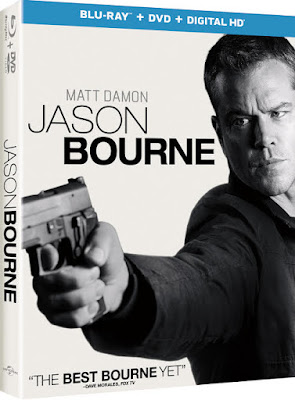 Jason Bourne: Matt Damon (Bourne Franchise, The Martian) is back and this time it’s personal in JASON BOURNE, the action-packed fifth installment of the blockbuster franchise.
Nearly a decade since fans last saw the former operative, the explosive return brings Jason Bourne into a whole new era, revealing key secrets about Bourne’s origins to a new generation.

Bonus Features on Combo Pack Include...
Own Jason Bourne on Bluray and DVD on December 6th!

Disclaimer: Only one entry per mailing address per giveaway. The prize will be sent via FedEx or UPS. No P.O. Boxes please. This contest is from Mind on Movies working with Universal. The entries will be checked. You must do what it says on the widget option to enter to win.
Posted: November 02, 2016
Labels: Expired Contests
Newer Post Older Post
Subscribe to: Post Comments (Atom)
Subscribe to Mind on Movies for Movie Screenings and Giveaways.