Enter for your chance to win The Vampire Diaries or The Originals on Bluray! 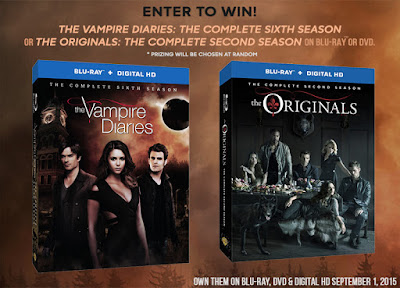 The Vampire Diaries continues its sixth season with more delicious drama to sink your teeth into. In season five, after a passionate summer with Damon, Elena headed to Whitmore College with Caroline, not knowing Bonnie sacrificed her life for Jeremy’s. Meanwhile, Stefan and Caroline’s friendship deepened as they stood up to the Travelers, a nomadic witch tribe driven to strip Mystic Falls of magic and cast out its supernatural residents

Contains All 22 Episodes From The Sixth Season Plus Two Featurettes, An Audio Commentary, The 2014 Comic-Con Panel, Deleted Scenes, And A Gag Reel

As Original vampire-werewolf hybrid Klaus Mikaelson returned to the vibrant, supernaturally charged city of New Orleans in season one, he was stunned to learn — along with his siblings Elijah and Rebekah — that Hayley, a werewolf, was pregnant with his child, and his vampire protégé, Marcel, whom the Original siblings had thought long dead, was ruling the French Quarter.

Own The Originals The Complete Second Season on Blu-ray, DVD & Digital HD September 1, 2015

Contains All 22 Episodes From The Second Season Plus Never-Before-Seen Featurettes And Much More!


The Vampire Diaries or The Originals:


Disclaimer: Only one entry per mailing address per giveaway. The prize will be sent via FedEx or UPS. No P.O. Boxes please. This contest is from Mind on Movies working with Warner Bros. The entries will be checked. You must do what it says on the widget option to enter to win.
Posted: August 30, 2015
Labels: Expired Contests
Newer Post Older Post
Subscribe to: Post Comments (Atom)
Subscribe to Mind on Movies for Movie Screenings and Giveaways.