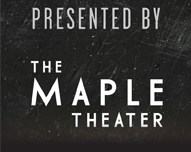 Secret Cinema is The Maple's classic film series with a twist - you won't know what you're watching until the lights go down! New Hollywood will premier on Thursday May 15th and starts at 7:30pm.

This event only happens at The Maple Theater in Bloomfield Hills, Mi every first and third Thursday of the month for another unnamed classic. The Maple Theater splits the series into two nights: Old Hollywood and New Hollywood, employing the pivotal year of 1967 as a historical and thematic dividing line.

If you want to be guaranteed to go you can purchase tickets for $5 HERE.
Make sure you enter the contest below for your chance to win!


Disclaimer: Only one entry per mailing address per giveaway. Your name and a guests will be added on a list to gain free entry if you win. This contest is from Mind on Movies working with The Maple Theater. The entries will be checked. You must do what it says to enter the contest to have a chance to win.