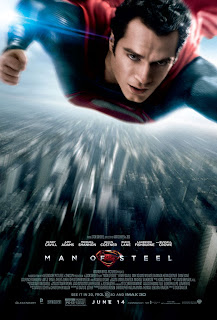 So your probably saying to yourself, "What am I doing reading this review and not going out to see the new Man of Steel movie." Well I actually agree with you. Everyone should see this fresh start to the Superman franchise. It takes Superman in a completely different light, and a better one at that.

Because this is the start of the Superman movies, they must give the back round information about his childhood. So Kal-El, oh yea that's what we call him now, not Superman, at least in the movie they didn't call him Superman, just Kal-El and Clark.

Henry Cavill played the role of Superman really well. He was really everything you want in a good Superman and then some. Russell Crowe was also really good in this movie. They really didn't use Lois Lane, Amy Adams, as much in the movie as they should have, but this movie was the mainly the back story of Superman or really Kal-El.

Some of the scenes were a bit too long. Like when they were fighting in the movie, I feel like they just wanted to add more special effects to add to the movie, so it made what you were watching longer. However, this movie is impressive in three D, I highly recommend seeing it in three D. The effects were really well done, and you won't want this movie to end at all.

Because there was no "end scene" after the credits started to roll, they added clues in the movie showcasing on whats to come up in the sequel. So make sure you keep your eyes peeled.
Let me know in the comments what clues you spotted in the movie leading to the sequel.

What would I have changed? (Spoilers)
Well when Jor-El, Supermans father, sent Kal-EL to Earth, they could have covered him up with a towel or something, to much was showing on the baby. Although they put clues in the movie about the sequel, I wish they had a end scene. I was actually looking forward to see what the end scene would be, and nothing.